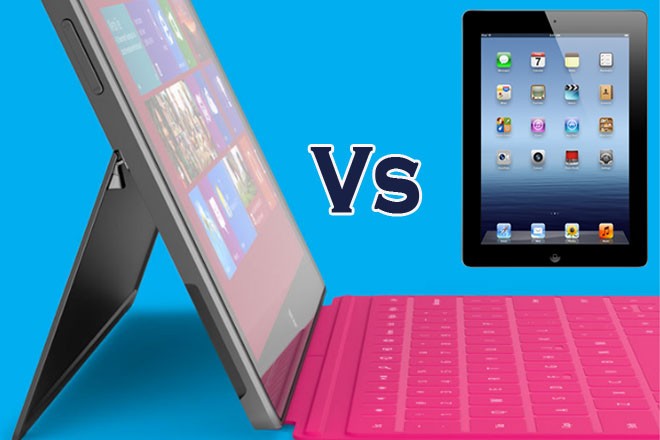 While contemplating my laptop purchase decision I put in much consideration for an iPad as my sole computing device a year or so back when iPad 2 had just hit the market. Much as I had wanted the device for its flaunt as well as form factor I realized that an iPad is not replacement for a laptop. For starters you still need a PC/Mac to sync everything. Secondly, the apple touch screen advanced as it is was no replacement for a standard keyboard (well you might say that I can just buy an external keyboard. But then the iPad is no IPad after that). Thirdly for someone like me the MS Office suite remains undoubtedly the most used set of software be it the MS Word or the Excel or the powerpoint. I ended up purchasing a dell laptop in the end.

Hence I believe the iPad for most users remains an entertainment device. A movie while on a flight, a quick update on twitter, catching up with what your friends have been upto on facebook – the iPad it is. So when Microsoft announced the SurfaceTablet I was excited because on first look it seems to have everything that the iPad had missing for me – A cover which doubles as a magnetic keyboard, a full fledged operating system, and in built office suite. But the idea of the tablet was not created by iPad. iPad created something more than a tablet. It created an unexisting want and a market for its own. For the Surface to make real ripples it has to get some things right in the first place.

1. It has to look good! – By looks I mean it has to look good externally for the flaunt factor. The display of the new iPad is its unchallenged USP. You may be targeting an enterprise or business customer but who says they don’t like a flashy device.

2. Its Ecosystem – The app market, the manufacturing, the supply chain, the marketing efforts, the pricing, developer support all need to be uncompromising. A product centric company often loses its sight on such things as customer service, marketing and support.

3. Positioning – A two trick pony often screws up both the tricks. The surface tab needs to identify its USP and target the right audience. The take on iPad head on might not be the right approach. The entertainment seeker might still stay with the iPad but there is a large market of enterprise users, of bloggers, of developers, businessmen, travelers who would want a bit more from their computing device than an iPad.

All said than done, Microsoft has joined Apple and Google in manufacturing their own devices. A well thought of move definitely. If nothing it will force the OEM players to raise their own standard. Good days for the consumer with an array of options to choose. The more the merrier I say, perhaps time to think of what to do with the Dell now.