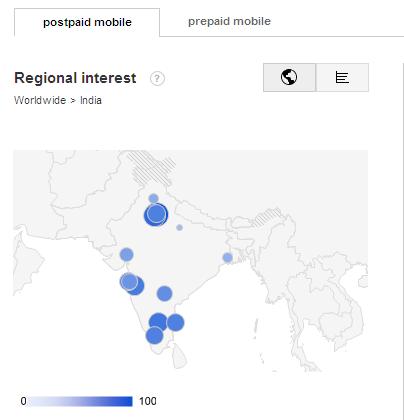 On a rather less busy Saturday afternoon in office I thought of taking a different approach to understanding the industry that I am in by looking at the bookworms source of market data – Google. Google Trends to be specific. As product managers in an industry that is as close to the grass roots as no other. To my surprise the google trend data on India clearly reverberated the major actions in the industry with almost no time delay. The rejig that happened due to the introduction of new players in 2008-2009 can clearly be seen in the search term “prepaid mobile” and not in “postpaid mobile”. This is obvious since the new entrants barely muddied the waters in the postpaid space. I am sure that if we sit down with a chronological list of major events in the industry it would closely match the ups and downs of the trends curve as well.

But my interest lay in the future and not in the past.

Can the trends map tell me something about the way the industry is moving in the future? Can it tell me where the market is moving? Well the afternoon was too short a period to do a policy study but some clear trends did emerge.

As a guide to the future I saw the interest in prepaid mobiles growing slower than that for postpaid mobiles over the past six months. This could be perhaps due to the fact that the new entrants have gone rather quiet. What with spectrum re-auction and long term sustainability in the industry being questioned the price war and the marketing hullabaloo has calmed down quite a bit. The industry seems to be going through a strange calm and interest in postpaid seems to be increasing which is again a sign of maturity. Digging further on the data Google provided I checked on the circles from where search interest is arising.

Regions of Interest – Postpaid Vs Prepaid 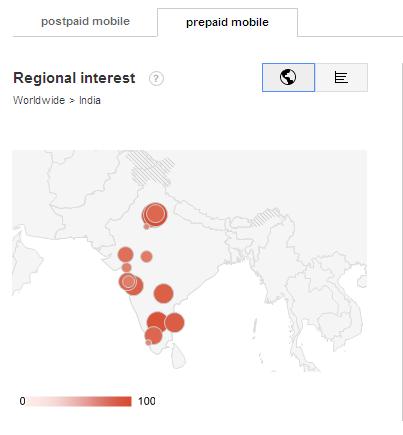 Further drill down tells you about the relative interest from towns and cities of the country. For example the small area around Mahape seems to be extremely interested in postpaid mobiles. The reason for the same is open to speculation but I have not seen too many postpaid outlets in the region.